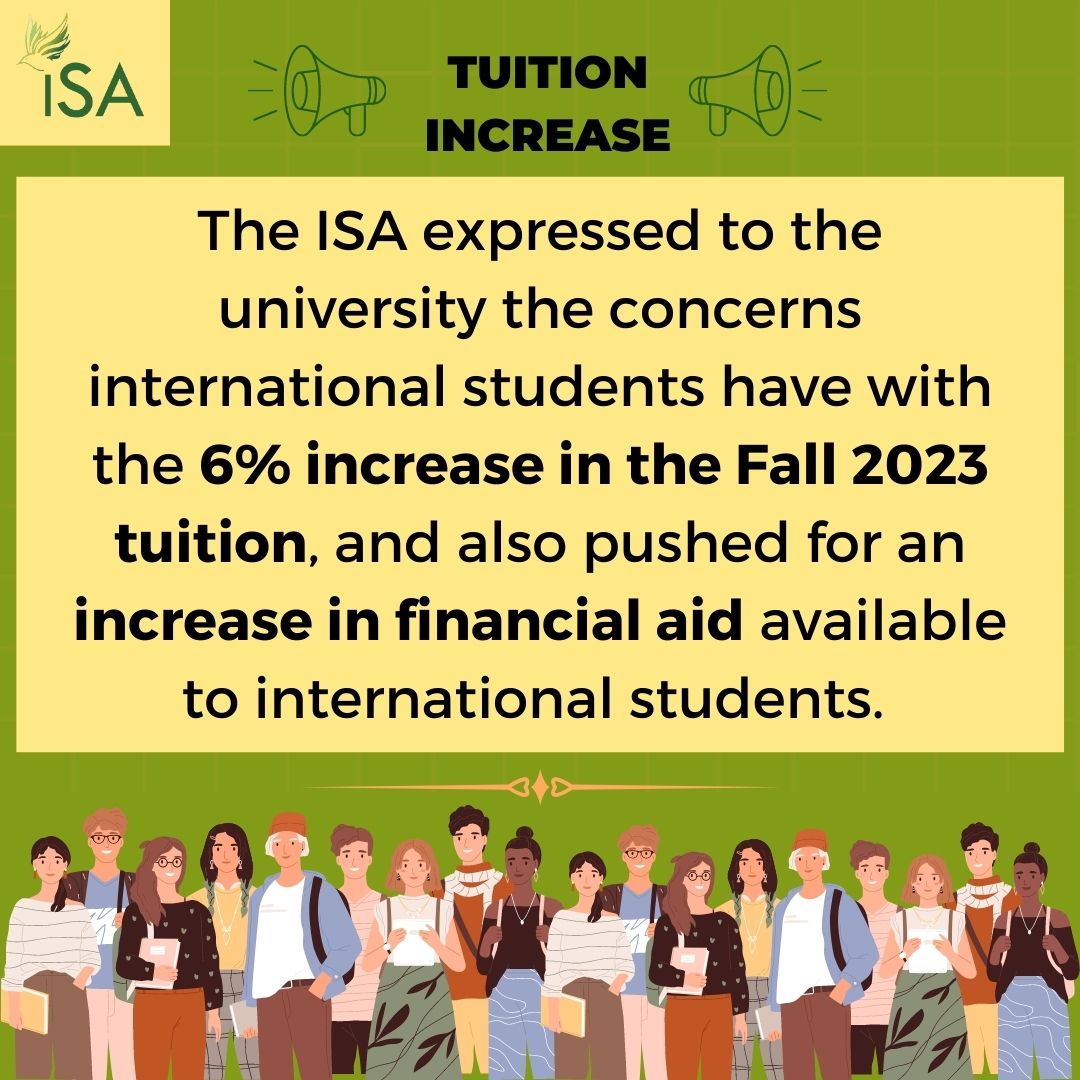 The ISA was first informed of this proposal on May 13, 2022 by a student leader who keeps up with the meeting agendas of the Academic Planning Committee (APC). We were not only taken aback by the lack of international students’ representation in the consultation process but also by the University’s and Student Union’s failure to inform the ISA about the existence of any such proposal.

This issue was raised by international councillors at the UASU Council meeting on May 17, 2022. It was decided that the SU and the ISA will work together in challenging this proposal in the APC meeting, where it was meant to be voted upon next. The students raised the issue of insufficient consultation in the APC meeting on May 18, 2022. The proposal was tabled due to insufficient consultation with international students.

Following that, the Provost consulted with the SU and ISA Presidents on May 25 and 26, 2022. Both the Presidents raised the following concerns:

1. International tuition rises with inflation (CPI), and the University tries to project the
increased cost due to inflation when setting tuition for a given cohort. The University has said that they need to increase the 2023 cohort tuition to 6% due to the current spike in inflation this year. We are skeptical that the current CPI number represents the University’s actual cost, especially because the University already stepped up the tuition in 2020, when they switched to the guaranteed tuition model from the registration based model, and additionally, the university includes a risk premium in these calculations as a cost for providing the guarantee.

2. Referencing the annual report on undergraduate enrollment, we noticed that fewer international students are applying to the UofA, and also the enrollment for international students has seen a decline of approximately -0.7% and -0.6% in 2020 and 2021, respectively. The pandemic could be cited as one of the reasons for this. It is important to note that as per the IRCC, the total number of study visas issued in 2021 was back to being almost as high as in 2019, and recovered from the 17% decline of 2020. However, the UofA enrollment did not reflect the same recovery. This tuition increase will further impact the enrollment negatively.

5. The UofA is being compared to the U15 average, however, the University of Alberta is not the most attractive destination for international students, so affordability is an important factor to attract them here.

6. Currently, only 7.55% of the tuition revenue will be set aside for the 2023 cohort. We
want to see more money set aside for need-based aid and the 7.55 percentage should
be increased to reflect the disproportionate increase in international tuition
year-over-year.

We have to regrettably report that this proved to be a mere token consultation. Today, we were informed that no modifications will be made to the Tuition Fee Proposal or the current Financial Aid framework. A special APC meeting was called on May 26, 2022. The same tuition fee proposal was presented again and it passed. The proposal will be further presented to the following bodies:

If all these bodies approve it, the proposal will be in effect by June 17, 2022 for the Fall 2023 cohort. This proposal goes against the spirit of objective 1 of the University of Alberta International Strategic Plan i.e., ‘Build a diverse community of exceptional undergraduate and graduate students from all parts of the world’, and also the provincial goal for 2030 to ‘Strengthen Internationalization: focused on becoming a leading destination for global talent’.

We are extremely disappointed with the rushed timeline of this process, which is not the first time this is happening, and with the lack of acknowledgement that has been given to international students’ voices at the UofA. Nonetheless, the ISA will continue to advocate against this tuition increase.

The ISA urges the BFPC and the Board of Governors to acknowledge international
students’ concerns and make decisions in alignment with the University of Alberta
International Strategic Plan and Alberta 2030.